The Weimaraner ~ From ‘A Celebration of Dogs’ 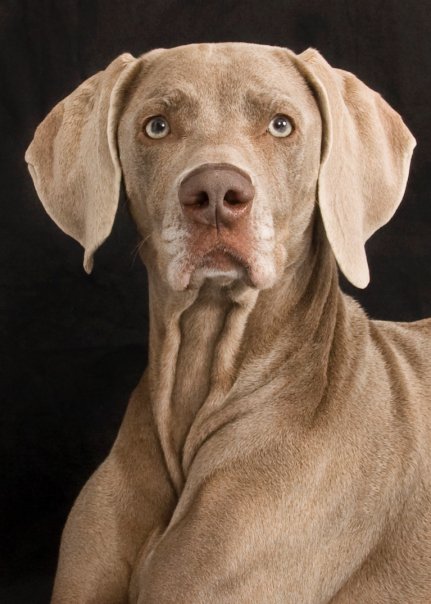 by Roger Caras
​
The Weimaraner, one of Germany’s top sporting dogs, dates back less than 200 years. It was meticulously developed by noble sporting patrons at the Court of Weimar. It was a snob sporting dog developed and jealously guarded by one of the biggest collection of snobs the dog world has ever seen. You were RIGHT or you couldn’t get your hands on one.

Bloodhound stock clearly played a large part at the beginning, as did a German breed not known in this country, the Red Schweisshund. The Weimaraner is a first cousin to the German Shorthaired Pointer.

​The Weimaraner is the perfect example of a highly refined breeding program that paid off, but it did produce a breed that is exactly right for some kinds of people and perfectly dreadful for others. The snobs of Weimar weren’t entirely wrong in the degree to which they protected their creation.

The solid mouse-to-silver gray Weimaraner with its short, dense coat is a breed that simply must have early obedience training or it is capable of being a first class pest. It is headstrong, willful, adoring, incredibly intelligent, and responsive to praise. When a Weimaraner doesn’t know what it is supposed to do, it can be counted on to do all of the wrong things. I have known Weimaraners whose owners had not bothered to train them or teach them manners to go through a plate-glass picture window because they had been left home alone too long and were bored, bless them. I know of one that dragged a charred log from a fireplace and pulled it from room to room chewing charcoal off as it went. It took a professional cleaning firm to repair the damage. It could have burned the house down.

That kind of flaky behavior must be seen in contrast to the well-managed dog, however, or it gives a distorted picture. A well-trained Weimaraner is a regal accomplishment of canine genetic art, and as intolerably ill-behaved as a mismanaged specimen can be, that is how extremely good, solid, and reliable a properly raised example will be. It is one of those dogs, and this is so often true of the sporting dogs, that is what you want it to be.
​
Few dogs can be more of a nuisance than an Irish Setter, a Vizsla, or a Weimaraner that has had its vital energy levels, its need to perform, and its exuberant love affair with life ignored. ​
​
They need to exercise, they need training, and they need opportunities to participate in vigorous, ongoing events. You ignore these facts at considerable risk to your property. I have known very few sporting dogs that had anything wrong with them except their owners.